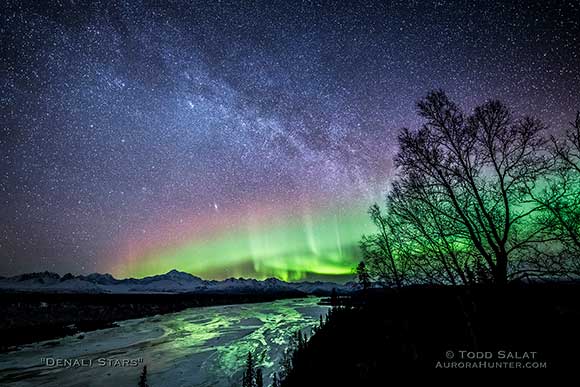 Denali, the tallest peak in North America, is backlit by dancing northern lights while the Milky Way Galaxy angles across the northern sky on February 8, 2018 at 2 am. This was one of those stellar nights when you feel extra happy to be alive and out under the stars. The crisp Alaskan air was crystal clear, perfect for nighttime photography, and in this 15-second exposure the depth of field revealed is truly out of this world!

In the foreground are the birch & spruce silhouettes along with the icy green glow of aurora light reflecting on the frozen Chulitna River. Next up is the snow-clad Alaska Range with its crown jewel, Denali, standing 4-miles high and 40 miles away. Beyond that the auroras appear to touch the mountains but that’s an illusion as the 50-to-300 mile high curtains of light wrap around the curvature of the earth 200-to-300 miles in the distance. It is now time to leave the earth far behind as we reach for the stars.

The Milky Way, the spiral-shaped galaxy that we live in, contains billions of stars, some revealed here in that concentrated “arm” of starlight angling up to the left. From our home in the Orion Arm this is our winter view of the neighboring Perseus Arm in the outer reaches of our galaxy. These stars are thousands of light-years away and one light year = 6 trillion miles… 6,000,000,000,000 miles!

If that’s not mind-blowing enough, do you see that white smudge in the red auroras above and to the right of Denali? That’s the Andromeda Galaxy (M31), also spiral-shaped, and is 2.5 million light-years away….which equals 15 quintillion miles! (a quintillion is 1018).

Together this image connects “Alaska, the Last Frontier,” an awe-inspiring, earthly terrain to wander in with “Space, the Final Frontier,” an unfathomably huge expanse to imaginatively wonder in.