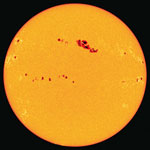 This is a very helpful tool for predicting auroras. On average, the sun revolves on its axis once every 27-28 days as seen from earth. Therefore, sunspots, like those seen on this solar image to the left, are like a giant revolving firehose emitting energy into space for sometimes months at a time.

After an active aurora night, mark that date on a calendar and in 27-28 days pay close attention to the sky. If that same sunspot (or coronal hole) is still active it will have rotated around with the sun and will be, once again, in geoeffective position (pointing toward earth)....and hosing us with an enhanced flow of aurora-generating solar wind.

The sun has a heartbeat. Every eleven years or so it beats, and it beats hard. This is known as the solar cycle and is measured by the number of sunspots visible on the sun. The more sunspots, the more solar flare energy is being released into space (which means more aurora activity!).

For 400 years, from the time of Galileo until now, we have been keeping track of the number of these sunspots and, as the trends show in these two graphs, this cycle is predictable.

Q: Where are we now on the solar cycle?

A: We are just starting to come out of a 4-year trough of Solar Cycle 24. Despite all the negative press the trough gets, I enjoyed the low phase and attained my goal of one “hero shot” per year (2017, 2018, 2019, 2020). The big question now is what will the upswing into Solar Cycle 25 present? Should get better & better as we head toward the predicted peak in 2025.

Aurora Borealis season in northern polar latitudes (Alaska, northern Canada, Greenland, Iceland, Norway, Sweden, Finland and Siberia) runs from August-thru-April. These are the nights with darkness in them. During the summer months of May, June and July it is just too bright to see them in the far northland. Auroras can still be spotted south of about 50° latitude during the summer.

Statistically, the equinox months of September and March are best for aurora activity. The winter months of October-thru-February are also good (there is definitely no shortage of darkness!).

Mythbuster: Contrary to popular belief, it does not have to be cold to see the aurora, just dark and clear....and clear skies usually mean it’s cold, hence the association between auroras and chilly nights.

What Time of Night?

The peak hours are between 11pm and 2am, however, anytime it’s dark there is hope. I've seen the northern lights as early as 8pm and as late as 8am.

Listed below are some websites of organizations that monitor the sun, measure the solar wind in real-time (now), and make aurora predictions. In the explosive event that a coronal mass ejection (CME) is reported it's time to hop into action because this super-charged solar wind is traveling fast (maybe 3-to-5 million miles per hour). When this energy sweeps by the earth 1-to-3 nights later there is a very good chance of aurora activity. It pays to stay tuned in. 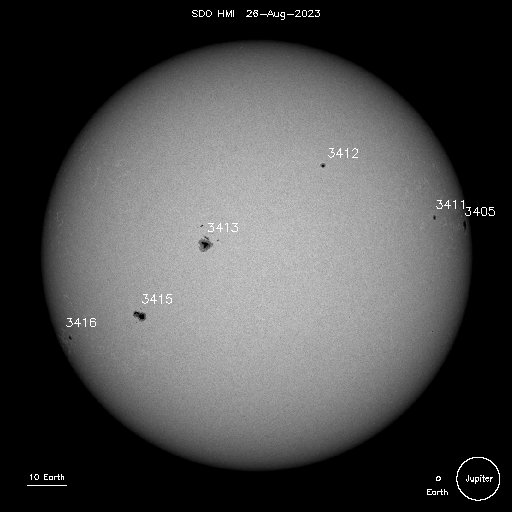