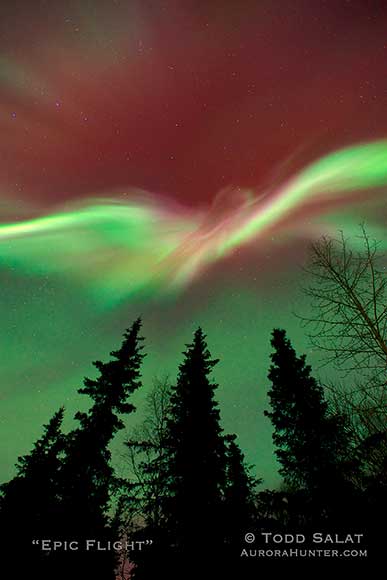 I was busy prepping my food and gear for a 2-week aurora hunt when the news flash came in that the sun had just unleashed an earth-directed coronal mass ejection (CME).  I went online and checked out the NASA solar footage and, sure enough, it was a "full halo" ejection…the earth was looking down the barrel of an expanding cone of super-charged particles.  The blast of solar wind was traveling at two million miles-per-hour and it was 93 million miles from earth.  Doing the math; two days until CME impact.  Time to get a move on it!

I arrived at my cabin in Hatcher Pass, southcentral Alaska, feeling excited that there was not a cloud in the sky.  I readied my tripods and by the time 11 pm rolled around the auroras were already roiling on the horizon.  Lock & load, here they come!

The initial aurora band streamed across the northern horizon like a meandering green river of light and wasted no time in advancing southward.  Before I knew it the auroras were right on top of me and turning red!  This was not a faint red but a bona fide blood red to the naked eye.  Suddenly, within a matter of just seconds, wings of extra bright northern lights caught sail and wheeled to the sky above, the spruce and birch trees pointing the way amidst the pinpricks of starlight.

This astounding view inspired the title "Epic Flight," since this display was truly of epic proportions, sending anyone who saw it on a first-class trip to the stars (note the Big Dipper!).  The event was so rare and so beautiful that March 17, 2013 was a lucky St. Patrick's Day, indeed.