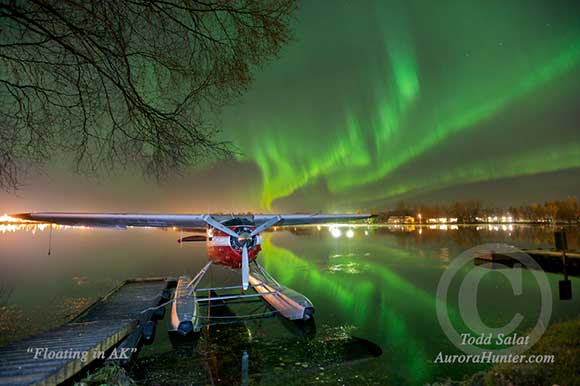 Floating in AK SOLD OUT the 950 limited edition prints and is only available as a Matted 5x7 and Matted 8x10 open edition sizes on our Custom Order Form.

The “Floating in AK” Experience

I stepped out onto the deck from our Anchorage home and gazed northward. It was crystal clear and the northern lights were already taking shape so I fueled up my belly with food and went downstairs to tuck my wife into bed. I hadn't set my course for the night so I asked her where she thought I should go. In a sleepy voice she murmured, "Go...to...Lake...Hood...and...get...a...float...plane...shot." Wow, what a great idea! It was going to be an all-nighter on the Hood, the largest seaplane base in the world. Stardate: October 13, 2012.

Many of the float planes had already been pulled from the water in preparation for the winter freeze-up but on the east shore (Lake Spenard side) I found this stunning red Cessna 195, a classic built in 1949 and held in high esteem in the aviation community (which is quite large in Alaska).

At the stroke of midnight stormy space weather whirled up and sent waves of green auroras reflecting across the serene lake water. Folks behind me had stepped out of the Millennium Alaskan Hotel and, despite the glow of the Anchorage Int'l Airport in the background, we all were treated to a spectacular aurora display. No bright city lights were going to stop this show from going on!

Many hours later I tucked my cold toes into bed and, half-awake, Shay whispered, "Did you get the shot?" Yeah, I think so...and then I floated away.

Acknowledgements: I'd like to thank "Captain Kirk," owner of Susitna Energy Systems for the permission to run with this shot. He's owned the Cessna 195 since 1992 and if this plane could talk...

Floating in AK SOLD OUT the 950 limited edition prints and is only available as a Matted 5x7 and Matted 8x10 open edition sizes on our Custom Order Form.