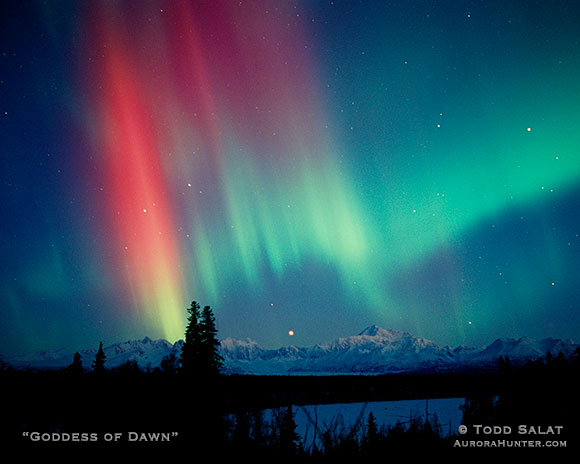 The “Goddess of Dawn” Experience

The aurora forecast was for quiet skies. I thought about staying home, but the northern lights are not always predictable and the call of the wild is unrelenting. It was late January, the heart, depth and soul of winter in Alaska. When I asked my wife, Shay, what kind of new aurora shot she would like to see, she replied, "How about some red auroras over Denali?" Whew! The challenge was on.

I found myself at my old post, MP 135 on the Parks Highway. Four years earlier I had obsessed for 30 nights at this location trying to get a "hero shot." This time it happened on the third night, right at the crack of dawn.

Jupiter was setting over the Ruth Glacier as the early morning alpenglow illuminated Mt. McKinley, aka Denali. I couldn't believe my eyes when, out of the deep blue skies, a towering curtain of red and teal northern lights developed within the twilight's first gleaming. Castor & Pollux, the twin stars of Gemini, twinkled in the candy-like colors above the tall spruce trees while the 5-star pattern of Auriga the Charioteer graced the other side of the sky.

This was a precious moment as the Aurora, "Goddess of Dawn," unveiled her otherworldly artistry.

Geography: This photo was taken looking northwest across the frozen Chulitna River braid plain at an elevation of 600 feet. About 40 miles away and rising almost four miles is Denali, meaning "The High One" in the native Athabaskan language. The prominent peak is the "South Peak" of Denali and is the highest point in North America at 20,310 feet. Although the auroras appear to touch the ground they are 50-300 miles high and 200-400 miles away.

Myth & History: In Roman mythology, Aurora, the goddess of dawn, opens the gates of heaven every morning for Apollo, the sun god. In the late 17th century, the Italian astronomer Galileo used the name "Aurora" to explain the luminous glow in the nighttime sky. He believed that the dancing lights were caused by sunlight reflecting off the atmosphere during the coming dawn. This theory is no longer accepted but the name aurora lives on.