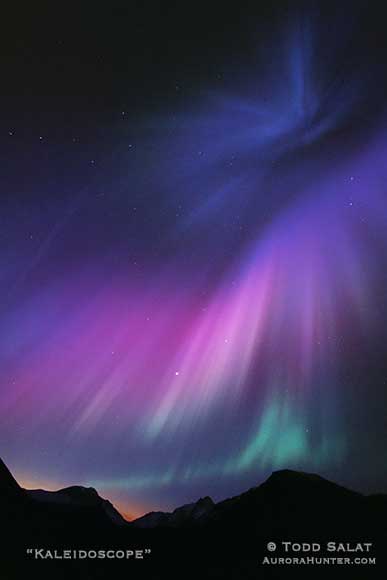 In Greek, "Kaleidoscope" means kalos (beautiful) + eidos (form) + scopos (watcher), the beautiful form watcher. Near dawn on Wednesday morning, October 29, 2003, I felt like I was transported into a kaleidoscope. I was lying in the moonless dark hillside above Anchorage, looking east into Powerline Pass from the Flattop overlook, while my mind and spirit were racing far above catching a ride on the endless variety of colors and forms that the aurora borealis offered. These were some of the brightest and varied colors I'd ever seen and preserved on film.

Skygazers around the world were tuned into the show that commenced locally around 8:30 pm on Tuesday night, October 28, 2003 with some active green and deep red auroras. A day earlier, the sun had announced its intentions with a dramatic full-halo coronal mass ejection, the one scientists reported sent billions of tons of charged particles into space. The solar wind streamed towards us at over a million miles per hour, yet when it arrived at earth and started to squeeze our magnetic shield the sudden increase in pressure was softer than a baby's breath. But that's all that's needed to pump energy into our ionosphere and to generate "the lights."

The rare deep purple corona near the top of this photograph is at an elevation of 300 miles (+/-) and owes its existence to resonance scattering. This miraculous two-step process first involves ionizing nitrogen molecules with the incoming solar particles, then lighting them up with the dawn's early high-altitude sunlight. The charged nitrogen absorbs the sunlight and re-emits the energy in the breath-taking bluish-purple hues. Streaming below this at an elevation of 100-300 miles is a brilliant pink curtain. The pink is a mixture of red oxygen atom emissions along with the nitrogen purples. Zipping about 50-100 miles above our heads from O'Malley Peak to Flattop was a ribbon of green. Green comes from excited oxygen molecules releasing their unwanted energy at a wavelength of 5577 angstroms, which happens to coincide with the peak of the human eye's sensitivity. It's all pure au naturel. NO COLOR FILTERS ARE USED.