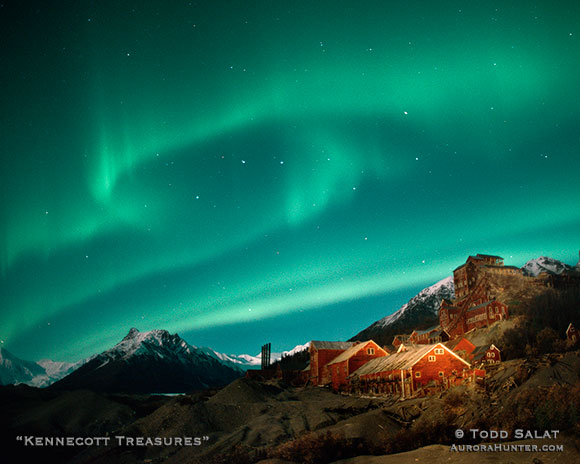 Autumn was here. Ahhhhh. After a typical crazy Alaskan summer it's always nice to see darkness return to the skies - and with it, the Aurora! This years fall project was to explore the Kennicott area in the Wrangell / St. Elias National Park. Built in the early 1900's on a huge copper deposit, the Kennecott Mill Site (note spelling difference) has partially withstood the test of time...and partially weathered into a captivating ghost mine with a very nostalgic allure to it. The artistic appeal had me hooked, and with it, an uncontrollable desire to photograph the Aurora dancing over the rustic red structures. It was going to be a treasure hunt.

On a September backpacking trip I didn't get lucky with the Aurora so October 1st found me once again driving down that 60 mile stretch of gravel road from Chitina to the McCarthy area. I parked at the Tram Station and now had to face a dilemma. After crossing the footbridge over the Kennicott River, how was I going to get 2 weeks worth of food and gear, probably a 150 pound load, up the little 5 mile gravel road to Kennecott. At this point I struck a great fortune - the operator of the Tram Station offered me his Subaru, which was on the other side of the river. Yes! (Thanks Randy!!). The vehicle also served as a huge bear-proof container to store my food in. I threw my sleeping pad in the back and that Subaru became my home away from home.

On that very first lucky night, the treasure was uncovered. I drove up the hill to the mine, found my favorite northward viewing angle, set up both tripods & cameras, and cooked up some noodles. The sky was clear, and just as I finished up my meal, a green Auroral band materialized out of thin air, right over the mine! It got brighter and brighter....then faded....then returned with a few of its friends and soon four bands were dancing through the Big Dipper and over the mine. A full moon in the sky lit up the snow on nearby Mt. Donoho and on the surrounding Wrangell Mountains, but the mine was just not quite catching the moonlight. I thought it might be like this so I had thrown in my million candle-power spotlight. I plugged it into the Soob's cigarette lighter, and after clicking the camera shutter open, I would 'paint' the buildings with a beam of light for several seconds. I experimented a lot since this was the first time I've tried this technique but was quite happy with the results. From the very beginning this whole experience was truly treasurable and the photographic reward is depicted here in "Kennecott Treasures."