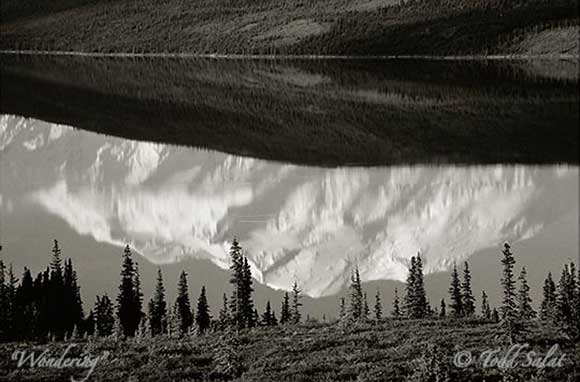 It was an all-nighter at Wonder Lake in Denali National Park & Preserve. I considered it a spiritual retreat of sorts.

My friend, Bubba, and I started that June evening wandering around the lake, taking pictures of wildflowers while Denali (Mt. McKinley) was socked in behind clouds. The only company we had were a few zillion skeeters and a couple of grizzlies that stood up and gave us a good, solid look before loping off. It appeared they had courtship on their mind.

In the midnight hours we sat on Ansel Adams Point praying that Denali would come to us and in the dawn’s early light it did. We took many shots but the one that caught my fancy was Denali on its head reflecting off of Wonder Lake. A fish ring marks the water surface.

Ahhh ~ the wonder of it all.