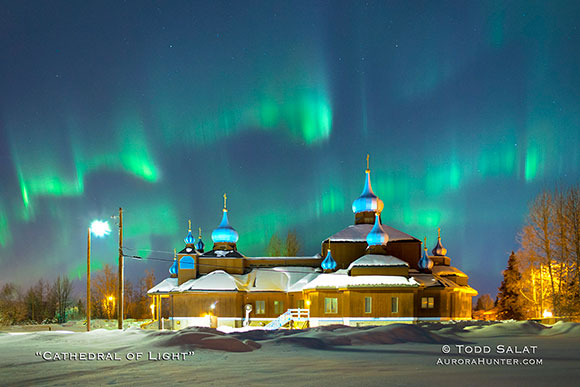 The “Cathedral of Light” Experience

Enlightening auroras dance above St. Innocent Orthodox Cathedral in Anchorage, Alaska just after 1 am on March 1, 2017. I had been trying to get this shot for 15 years!

A week earlier forecasters were predicting clear earth weather & active space weather so I had both eyes on the sky looking for a sign. A little after midnight a faint aurora glow gave me hope. Not feeling the need for speed I had a casual dinner, warmed up the truck, took a last look from our back deck–nothin’ doin’–and was on the road by 12:45 am.

Minutes later I ramped onto the Glenn Highway only to glance upward and be awe-stricken to see the auroras had suddenly erupted everywhere! I gave the truck some gas and said to myself, “This show could be over in minutes! Think Todd! Where to shoot in the city?!” It was then the sign came to me and it said.... Turpin Street exit. Of course, St. Innocent Cathedral, go, go, go! I took a hard right onto the exit ramp and had the truck & camper on two wheels (not really, I believe in self preservation) but I knew every second counted so when I pulled into the church’s parking lot I was relieved to see the auroras were still really bouncing.

I threw on boots & parka, slapped camera on tripod and plunged into a couple feet of snow. I quickly took a few test shots, not good, re-adjusted focus/settings, post-holed to the right several more yards, planted the ‘pod, took a deep breath, and click. I did a 1/2-second exposure. Bingo! I knew I had it the second I saw it, those rippling pulses of green auroras frozen in motion above the cyan-colored onion domes. This was a spiritual moment. Wow, I felt I had really lived a lot in those 16 minutes since I left my house. Quickest aurora hunt ever!