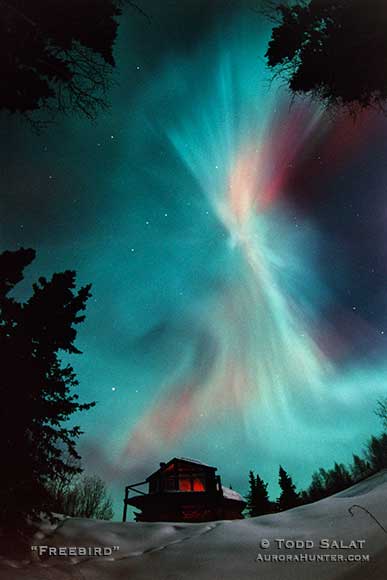 Many moons ago (a decade-plus) I searched long and hard for a piece of land in Alaska that would take me to where my dreams were free to roam. Eventually I found an old half-built cabin up in Hatcher Pass. It was eighty miles north of Anchorage ~ an adequate getaway distance ~ and the main beam of the cabin was aligned with the North Star. Perfect!

With the help of my dad and some friends we transformed the framed-out octagonal structure into an aurora viewer's delight. It was here that I cut my teeth on aurora photography. Today, I continue to find peace, tranquility, and dream-space, at the Hatcher Pass cabin. The inspirational feelings it helps generate has earned the cabin it's nickname, "Freebird."

On this particular evening a green glow in the northern sky sent my spirits soaring as the hope for good things grew. I prepared the cabin with the warm incandescence of candles then lugged my gear through the snow and set-up below.

Fingers of the aurora began to lick southward across the sky. The northern lights grew in size until the entire sky radiated with a force that never fails to leave me awe-struck. The "corora effect" created an umbrella of light as red and green rays rained down on all sides of me. Facing southward, I pointed my widest-angle lens nearly straight up into the sky to record as much as possible. I was very pleased the Big Dipper had rolled in for the show and spilling out of the Dipper stood the North Star. The moonlit snow with a single moose track carved through it and the tall spruce trees provided the framing. I felt the connection being made and as a rush of that"Freebird"feeling coursed through my veins.