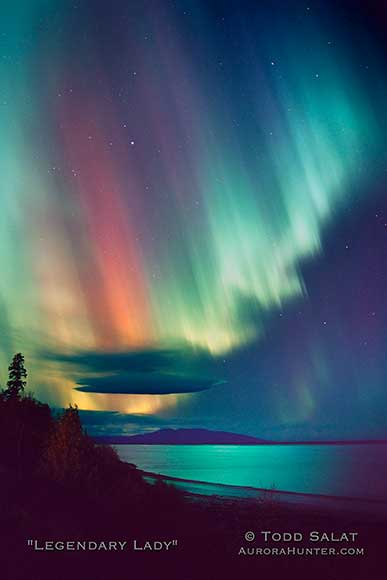 This shot was taken in Anchorage looking west from the Earthquake Park overlook around 1am on September 30, 2000. The auroras were going all night long and are seen here dancing over Mt. Susitna,locally known as "The Sleeping Lady." The notch in the 4000' mountain is her neck and her hair flows to the left. Is she lying on her side or her back??

This version of the legend of the Sleeping Lady compiled from the stories of Nancy Lesh and Ann Dixon.

Many millennia ago, a clan of gentle giants inhabited the Great Land, now known as Alaska. Among the giant people was a beautiful young lady and a handsome young man who fell deeply in love with each other. Their unbound devotion was so joyous that all the villagers admired them and preparations for marriage were underway.

On the day before the wedding a messenger brought dreadful news that a fierce war-like people from the north were invading the country and destroying everything in their path. The village gathered in council to decide what to do. Some suggested going north to attack. The young love-filled man proposed taking gifts to the enemies instead of weapons, showing their interest was in peace and not bloodshed. By morning the brave volunteers were ready to leave.

The young lady had tears of sadness when her lover came to say good-bye. He gazed softly into her eyes and whispered, "I shall return soon with news of peace. Meet me by the slender body of water with two arms." With one gentle kiss he turned and joined the departing men.

The young woman hurried to the pool of water, known today as the Knik Arm, and began the wait, confident that she would soon be back in her mate's arms. For many days and nights she busied herself while waiting until finally she grew very weary and laid down to rest. She fell into a deep sleep.

While she slept, tragic news reached the village that their young men's pleas for peace had been in vain and a terrible battle had broken out. Most of the giant men were killed or captured. When the village women approached the young lady with the tragic news, they could not bare to disturb her from her peaceful sleep, and left her as she was. To this day, the sleeping lady lies there dreaming of the moment her beloved will return to her side and peace once again rules the land.