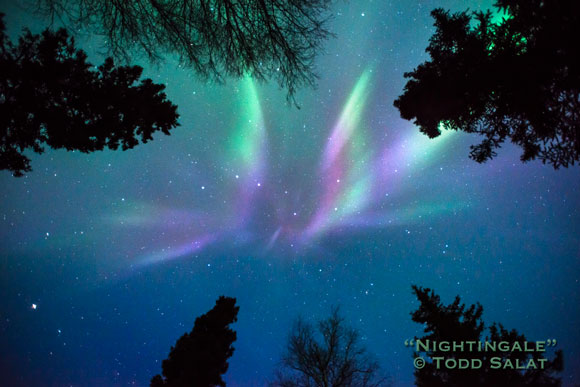 The Nightingale bird is so named because it sings its creative and seemingly spontaneous song at night.  This, I can relate to.  It was springtime in Alaska and I was aurora hunting on Harding Lake near Salcha (midway between Fairbanks & Delta Junction).  It was the last big aurora hunt of the season and the precious hours that contained darkness were fading fast.  At a half-past midnight on April 18, 2015 it was time to fly.

Colorful wisps of aurora light drifted through an opening in the trees overhead.   I perched on my back on a nearby picnic table that was half buried in the snow and gazed upward.  A delicate aurora flew across my tree window view, fanning out its translucent wings through the Big Dipper.  This radiating pattern is known as the "corona effect" and sings a song for the eyes, creative and seemingly spontaneous.

* * * *  Starry Notes * * * *
Spill out of the Dipper to the North Star.  The right two stars of the Big Dipper are called the pointers since they point to Polaris, the North Star (near the top edge of photo).
* Arc to Arcturus.  Arc out of the handle of the Big Dipper and it leads you to Arcturus, the brightest star in the northern celestial hemisphere in the constellation Boötes (lower left corner).