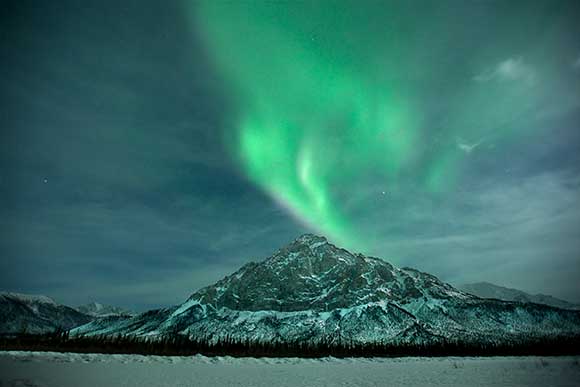 In March 2010 I embarked on a 2-1/2 week lone wolf aurora hunt up the Dalton Highway (Haul Rd) to the Brooks Range of northern Alaska. Despite being in the low of the 11-year solar cycle I saw aurora activity 13 of the nights and was fortunate to score mostly clear skies. Near the end of the trip the weather turned bad and I was blown off of 4600' Atigun Pass by a wicked wind that had knocked over both my tripod/camera set-ups the night before (nothing a little duct tape couldn't fix). How do you spell relief? V-V-Vrrroom–that's the sound of my cold truck starting and dutifully transporting me down the south side of the range to a relatively calm spot, one with a view…

The streaming veil of clouds had a calming effect (since I was no longer in them) as they sailed over the edgy, pyramid-shaped Dillon Mountain. Moonlight exposed the sharp boundary where the tree line, which has gained a tentative foothold in the avalanche zone, terminates abruptly against the rugged limestone face of the mountain.

Anticipation grew as stars began to twinkle through the thinning clouds and at the stroke of a quarter 'till midnight on March 27, 2010 the auroras sparked, making my day! The alignment was wonderfully fortuitous as a column of light emerged from right over the peak of the mountain and proceeded to erupt into a tight but intense geomagnetic substorm; the break-up. Green auroras flared with pink and white, illuminating this "Peak Moment" with colorful radiance. The nighttime world was everything but cold, dark and windy. For a long moment it was euphoria.