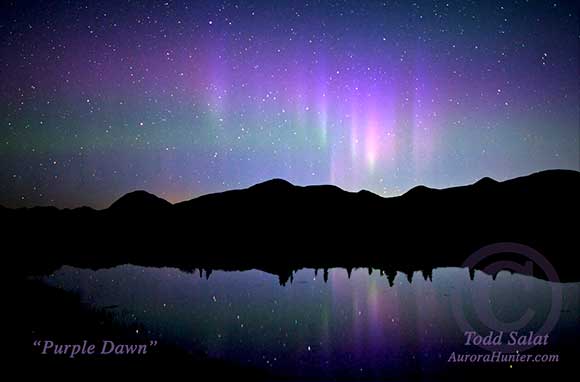 My wife and I were on our annual autumn aurora hunt, cruising along the Denali Highway eastbound from Cantwell. The predominately gravel highway sidles along the southern flank of the Alaska Range making it a great place to get lost without ever really losing your way.

On this particular evening, we parked the truck camper next to a small lake in the Tangle Lakes region west of Paxson and spent most of the night just stargazing... hoping the auroras would join in on the fun. Around 4 am, I was considering turning in for the night but I've learned this lesson before and decided I better not waste the dawn. An hour later, in the last remaining moments of nighttime, a delicate tapestry of purple auroras appeared backlit as they shimmered against dawn's early light, making the wait that much more rewarding. The stars and the northern lights twinkled on the reflective surface of the lake until it was too bright to see them. Daytime had arrived, which meant time to go to bed.

The rare purple aurora occurs at an altitude of 300 miles (+/-) and owes its existence to resonance scattering. This miraculous two-step process first involves ionizing nitrogen molecules with the incoming charged particles, then lighting them up with the dawn's early high-altitude sunlight. The charged nitrogen absorbs the sunlight and re-emits the energy as purple light. Turbo-boosted auroras.