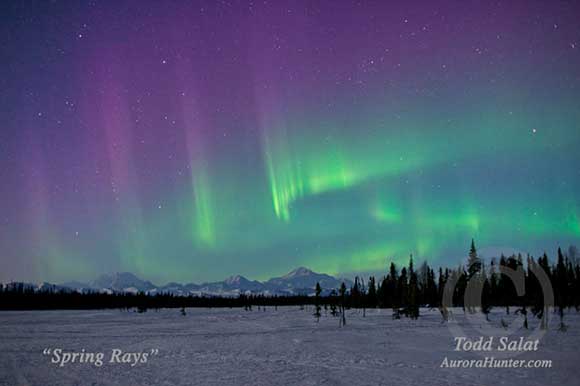 My world revolved within four hours, midnight-to-4am, the fading window of darkness on April 20, 2013. I was in the Alaska Range on a springtime aurora hunt, my last before the long days of summer put the aurora to bed for the season. The clarity of this night, with a half-moon illuminating the snow, made me feel like I could reach out and touch these classic peaks (from left-to-right); Mts. Foraker, Hunter and McKinley, more affectionately known as Denali.

At 1:30 am a faint green band developed and hovered quietly for an hour, giving me hope. Suddenly, right when I was thinking a big aurora might not happen, it activated! The green band began to ripple and then folded onto itself as it divided into multiple columns of light. They swelled upward into translucent curtains tinged with deep purple.

This was the hero nature moment I'd been waiting for as "Spring Rays" filled the sky over Denali! The moment lasted for a good half-hour but all too soon the aurora began to subside. The short night faded into the early dawn as I plopped on my back in the snow to absorb the raw beauty and thanked my lucky stars for the wondrous injection of energy.

Star Stories: The pentagon-shaped constellation on the left is Auriga, the Charioteer, and was named a couple thousand years ago to honor the importance of chariot drivers in those societies. Perseus is the group of stars in the upper right and includes the head of Medusa (represented by a eerily winking variable star). Further to the right is part of the constellation Andromeda, the beautiful maiden that Perseus rescued from a sea monster in ancient Greek mythology.