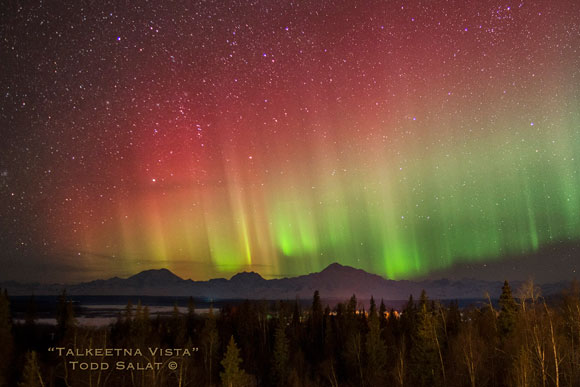 It was March, prime aurora season, and I had been invited by a tour company to ride up on their motorcoach to the Talkeetna Alaskan Lodge, 115 miles north of Anchorage. My job: to get the aurora juices flowing with a PowerPoint presentation of my northern lights photography followed by some hands on camera instruction. A few months beforehand I had been asked to present to 28 travelers who were signed up for a combo trip to watch the Iditarod sled dog race and hopefully to the catch the auroras. I was delighted when I found out it was going to be at this beautifully located lodge with its panoramic view.

The presentation went well and afterward we pulled out the smartphones to see how the aurora forecast was looking....quiet to unsettled. That's like a weatherman saying it's going to be somewhere between cloudy and clear. In other words, not quite sure, so the only thing to do is stay up late and watch the skies.

Just after midnight on March 6, 2016 a green glow began to develop over the Alaska Range to the northwest as the auroras slowly started to dance. Game on! For several hours mellow light waves ebbed and flowed. Then, at a little after 4 am, a faint deep dark red tint became noticeable which was exposing beautifully with an 8-second long camera exposure.

Myself and a few other hearty late-nighters were extremely excited to be getting red auroras in our photos! Especially when they occur right over this classic Alaska Range profile with Mt. Foraker (17,400') on the left, Mt. Hunter (14,573') in the middle, and the tallest peak in North America, Denali (20,310', formally know as Mt. McKinley and formally measured at 20,320') on the right. This trio of peaks is so prominent from the bluff overlooking the town below that we call it the "Talkeetna Vista." It's definition vista; a pleasing view from a high place.