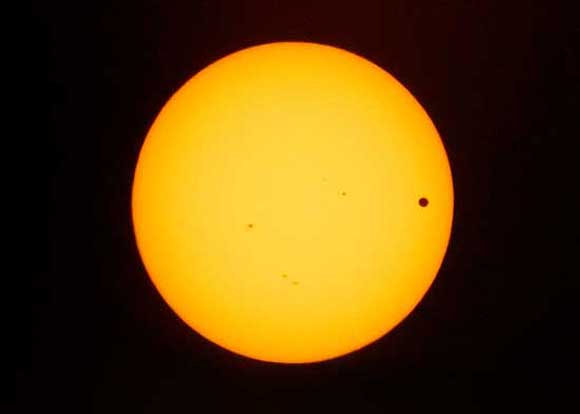 On June 5, 2012, from atop a parking garage at the University of Anchorage, Alaska (UAA), I watched the "Venus Transit" along with hundreds of other enthusiasts.  Alaska was in prime position as Venus, the second planet out from the sun, aligned itself directly between the earth (3rd planet out) and the sun, creating a little black dot that gets more amazing the more you think about it.  This is our solar system in rotational action and this particular celestial alignment will not occur again until the year 2117.

In, perhaps, the most gorgeous weather of the year, the transit began at 2:06 pm as Venus appeared on the left side of the sun and slowly moved across the solar disc for the next 6-1/2 hours.  Venus has almost the same diameter as earth and is 1/30th the diameter of the sun.  During the transit, Venus is 27 million miles away from earth and therefore appearing quite small.  This provides a perspective for how enormous our sun is which is 93 million miles away from us.  Venus, being closer to the sun, is much hotter than earth: 900° F, hot enough to melt lead!

I took the photograph "Venus Transit" at 7:42 pm AKDT as Venus was exiting along the right limb of the sun.  To get a proper exposure I placed a pair of "eclipse glasses" over the lens.  Dark as a welder's mask, these little 3D looking glasses block 99.999% visible sunlight and all the harmful UV.  My retina thanks UAA for having these available so my eyes will live to see another day.

The aurora hunter in me was also excited to see the visible sunspots, those other black specks in the middle of the sun.  As we approach "solar max," sunspots and solar flares become more common which means more aurora activity!