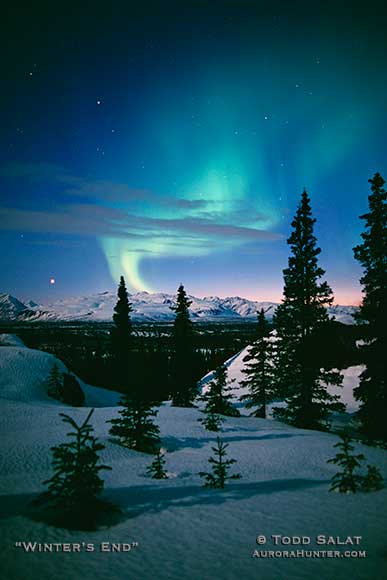 It’s April in the Alaska Range, "Winter’s End," and the long, cold dark season is being replaced by light and warmth (defined as anything above 32° F).  The overburden of white stuff is slowly thinning and releasing the young spruce trees from their snow-packed tomb.  I’m in my truck camper sleeping and waiting patiently for those precious few hours of fading darkness, hoping to catch one final glimpse of the aurora before the bright lights of summer hit.

Midnight comes and goes and, in the blink of an eye, the orange glow of a sunset belongs now to a sunrise. The north/northeastern horizon is getting brighter as 2 am nears - there’s only an hour or two left of the star-studded skies and the quasi-darkness needed for aurora shooting.   I feel, truly feel, the elements coming together.  They’re pulling me in as I pre-visualize an ideal composition.  I count over ten natural elements:  snow, trees, moonshadows, valleys, peaks, sunrise, blue-to-black skies, stars, Venus setting, clouds, and the aurora ~ where’s the aurora?   I need the aurora element for completion.

And then it happens, the forces of nature pull their trigger and all heaven breaks loose.  A green glow emanates from the east (right of photo) and soon smoky green auroras curl higher and higher into the sky.  I get off three shots.  As the aurora moves overhead I crank up the tripods and get underneath the cameras and shoot straight up.  Only a few minutes have elapsed but I’m already breaking a sweat, unzipping my parka and letting it fly.   The auroras surge north/northwest (straight ahead in this photo) and appear to touch the mountains as they continue on their 50-300 mile high circum-polar journey around our planet.  My adrenaline races when I realize this is the composition I had pre-visualized!

I grab a tripod with each hand, dosie-doe into position and compose the "elements" shot, making sure to include those endearing little spruce trees in the foreground.  At that moment everything is singing and I feel another natural element being added to the scene ~ the human element.