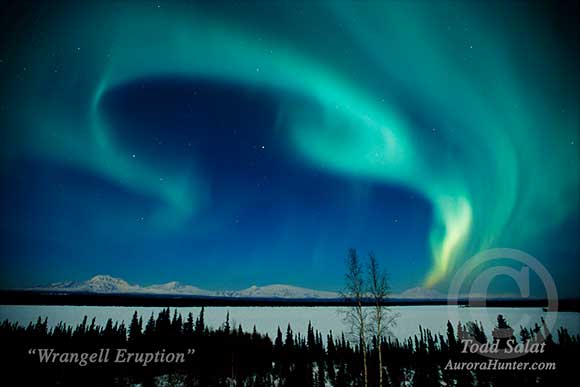 Please stay cold.  I was surprised to hear myself wish for this as I stuck my head out the camper door and squinted northward into the gathering darkness. A late February high-pressure system had slid over from Siberia and was pouring its chilly air onto the Wrangell Mountains, effectively keeping all clouds at bay.  Staying cold meant continued clear skies and that's the first order of business when aurora hunting (myth buster: it does not have to be cold for the auroras to form, it usually just is when it's clear enough to see them).

Earlier in the day I faltered a bit while fueling up at Kenny Lake Mercantile when the attendant told me it was hitting forty below at night (that would explain the stingingly numb fingers and toes and why my eyelid kept sticking to the camera last night!).  I never take a thermometer with me on these trips-I find it easier on my psyche if I don't know the temp.  Ignorance is bliss.

In the crystal clear cool air the stage was set.  The spruce-lined Willow Lake glowed in the bright moonlight and somewhere in the distance ice pans sluggishly flowed down the mighty Copper River.  A string of volcanic pearls-Mts. Drum, Sanford, Wrangell and Blackburn-provided character profiles for the skyline.

After a couple of uneventful nights I began to wonder if the auroras had received their invitation. But around 8pm on the third night a green wave knocked on my door and about caught me off-guard (that's way early).  Luckily for me I got that wake-up call!  Soon after, I was clocked on and in position when the aurora erupted above Mt. Blackburn and swirled across the sky like plumes of light caught in some form of interstellar turbulence. The invigorating combination of adrenaline and natural awe was enough to take the chill out of the air as I took in the magnitude of the "Wrangell Eruption."